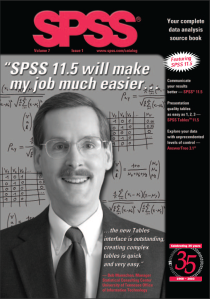 SPSS is extremely popular at The University of Tennessee. New versions go through “beta testing” during which testers work the software as hard as possible, trying to find bugs and testing out new features. In 2003, the company added a table building interface that is both easy to use and quite powerful. I commented on how much I liked it and they asked if they could quote me. Soon afterwards their 35th anniversary product catalog was being planned and they asked if I would mind appearing on the cover. I had just purchased my first digital camera so I sent a self portrait that I took using a tripod. As impressive as it looks, I was not standing in front of a formula-filled board; they added that later. The SPSS Directions meeting took place soon after the catalog shipped and everyone there was saying, “Hey, aren’t you the catalog guy?” It was a very surreal experience!